After the GNOME 40 mockups release, the obvious expectation for me was that GNOME will have a normal dock at bottom, but It’s been a long time since then, and the dock is only in Activities 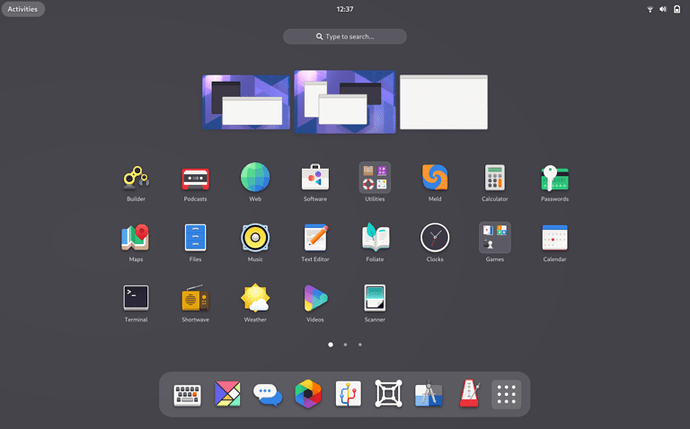 I think it’s obvious to everyone that without a full-fledged dock, GNOME can’t be used more productively.
I made examples to make it more interesting

One of the most trivial examples is the app menu, to open it you have to open Activities, then open app menu.

With Dock, you just click to app menu, and it opens app menu.

Also, because of the lack of a dock, you can’t quickly switch between applications, It’s especially painful when you have a lot of opened apps

ESPECIALLY IMPORTANT! You cannot drag and drop files between applications

It’s super convenient, to use dock while drag n drop when some app is hided.

Also, the dock can be used for quickly switching between apps that opened at full size (can also be handy for drag n drop).

I could give more minor examples, where dock is convenient, empowering etc. But I’m too lazy.

My main message is that GNOME lacks of dock enhancement, it is very strange that it is still only in Activities and cannot be used everywhere

So install Dash to Dock. That’s the whole reason GNOME Shell has an extension system, to support customization. And it provides most of the things you want.

I think it’s obvious to everyone that without a full-fledged dock, GNOME can’t be used more productively.

Nope. Not obvious. I’m very productive without a dock, in fact I have no interest in one. I use Panel Favorites to keep a set of most-used applications in the top bar, Applications Menu to have a Windows Start-menu-style application launcher in the top left corner of my display, and I switch windows either with Alt+Tab or by opening the overview using the hot corner. (I use a traditional pointer-mouse.) I also switch workspaces by rolling the mousewheel over the Scroll Panel I have configured on the top bar.

This has to be said regularly, it seems, so:
Not

If you want a dock, use a dock. But don’t talk like it’s some sort of universal need, Maslow.

ESPECIALLY IMPORTANT! You cannot drag and drop files between applications

You ASSUME that’s how it would work with a dock, but I don’t know why you would assume that, since you can’t drag files into the overview to drop them on applications in the dash. Nor can you drag files onto application icons in the file manager — well, that’s a misdirection actually, since Nautilus no longer supports application icons of any sort.

Dragging a file to an application’s icon in a dash/dock isn’t at all the same thing as dropping it into the application window itself. And indeed, the dash-to-dock icons don’t accept file drops. And since they require a left-click to switch workspaces, they also don’t auto-switch when files are dragged over them.

GNOME’s UI isn’t really big on hover actions. I don’t know if you’ve noticed yet (but I’m sure you will eventually), but the sidebar folders in Nautilus aren’t spring-loaded either. (Frankly, I’ve always been surprised that the window tabs ARE, since it’s such a rare interaction that it almost feels inconsistent. I can only assume the difference is that the tab switching doesn’t have to navigate anywhere, it just switches already-open views.)

On this one, too, I accept your desire, but I don’t share it. I don’t open files by drag-and-drop. Period. I use open dialogs. *shrug* People are different.

Anyway, with the visible dock on the desktop, it would give more behaviors to use

By the logic, dock would have update with new functionality module, which allow it to be used not only in Activities.

Extensions is not the obvious thing for some people, many people often think only of themselves and forget that there are other people.
Extending the functionality of the dock does not seem like something foreign to GNOME,
by the mockups on GitLab you may notice something related to the dock on the desktop, like app launch indicator, this animation cannot be seen in Activities when launching applications, because Activities closes after app launching.

Also, it would be cool to implement an indication of several opened windows of the same application.

Ubuntu has one nice feature that could also be added to GNOME’s dock, apps with several opened windows can be viewed like in Activities, but view only windows of this one app.

I’m not using extensions on Gnome Shell. I’m not lacking in productivity for my use. On desktop PC I use the “fling the mouse” method and it works well for me. On laptop PC I use the 3 finger gestures (documented in help) and they work well for me. I gravitated towards Gnome Shell exactly because it offers a distraction free experience. I don’t want a dock, icons on the desktop, or indicators on the panel. There are other DEs that provided all that.

Ubuntu has one nice feature that could also be added to GNOME’s dock, apps with several opened windows can be viewed like in Activities, but view only windows of this one app.

What you’re showing there is the Dash to Dock extension (rebranded as “Ubuntu Dock”) with Ubuntu’s configuration preferences.

Extensions is not the obvious thing for some people, many people often think only of themselves and forget that there are other people.

I don’t think that’s the case. You’re wanting to add things to Gnome Shell that, I think, are antithetical to its design and which anyway already exist for users that want these things. Ubuntu gives users Gnome Shell with a dock. Other OSes provide other layouts, for example Zorin OS gives users Gnome Shell with a panel. So users don’t need to know about extensions if they want something different, OS developers can and do provide alternative layouts to users without them needing to know about extensions.

But okay, on an OS with stock Gnome Shell the user would need to discover extensions if they wanted these kind of changes. Maybe then the issue is not that Gnome Shell doesn’t have a dock (it has, through extensions) but that extensions are not an easily discoverable feature when browsing the OS itself: they aren’t mentioned in the Tour app and they aren’t found in the Help (aside from a mention in GNOME Classic), at least not that I could find.

It can be both Activities-like usage and Dock-Like usage of GNOME Shell.

Dock isn’t antithetical for GNOME, because there is already in GNOME, but it’s appearance on the desktop will definitely change the perception, like thumbnails in File Picker for example, it changed the perception, although it is small change.

Dock on the desktop also seems like a small change, but it definitely increases accessibility it’s impossible to argue with that.

Dock on the desktop also seems like a small change, but it definitely increases accessibility it’s impossible to argue with that.

You keep saying that, but you are missing the magic modifier: “for me”.

Personally, I agree that a dock allows to do what is said here.

Android seems to have a dock, it can be used for tiling and for switching between applications.

Mobile compatibility (how do you represent all these things in a smartphone?)

To have better arguments, it is necessary to describe in what it is better than the design of convergence with mobile.

It’s hard for me to imagine using a dock on smartphone, because it’s completely different device, in fact, there’s no desktop on Mobile GNOME.

On desktop and tablets it is the opposite, there’s enough screen space for the dock and behavior use is similar.

For convergence, you have to imagine how to use the dock on a smartphone… You can’t sell your idea without that…

For convergence, you have to imagine how to use the dock on a smartphone… You can’t sell your idea without that…

I think good convergence should be comfortable on different devices and not to load you with unnecessary functions. You don’t need a flashlight or mobile network in quick settings on laptop or desktop, at the same time, this functionality is very necessary for smartphones, so dock is unnecessary on a phone like a flashlight on a desktop.

The flashlight is about a toggle or an app, whereas here we are talking about the user interface and experience which needs consistency across devices.

Dock may consistency across desktop, laptop and tablet devices.
On the phones…

To use as an aid for tiling? 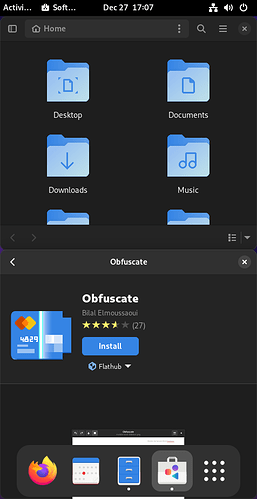 To use as an aid for drag and drop files? 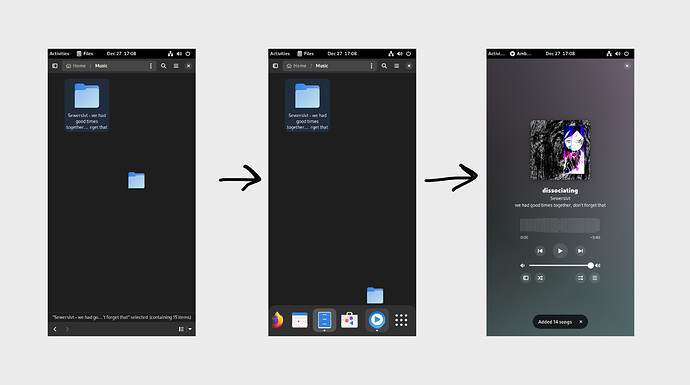 It doesn’t look natural on phones, but it could be done too if you want.

By looking on mobile shell mockups, and this blog it looks like a separate shell from GNOME Shell, there’s no workspaces and dock at all

By this logic, if on mobile apps runs on full screen, and window management is done in the app management view, 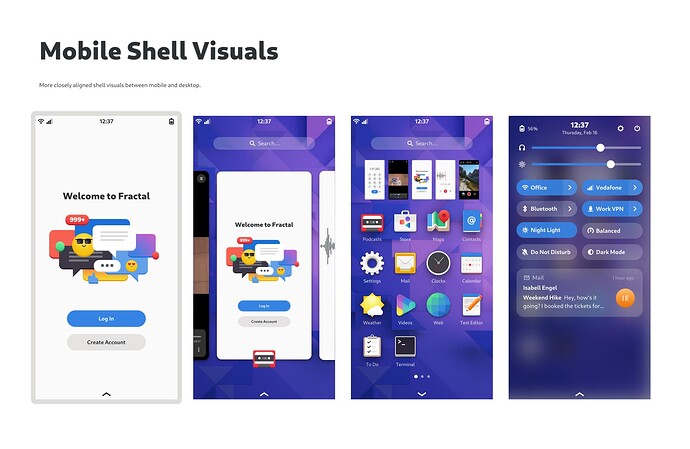 on desktops window management would be done on desktop, there is more room for apps and for dock at the bottom, which can be used to manage applications, without using shortcuts, switching to other views and dragging an arrow at bottom.
Dock be perceived as a “fat version” of the arrow at bottom. 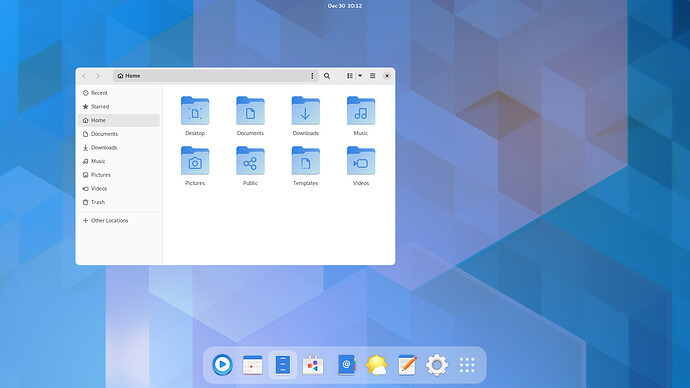 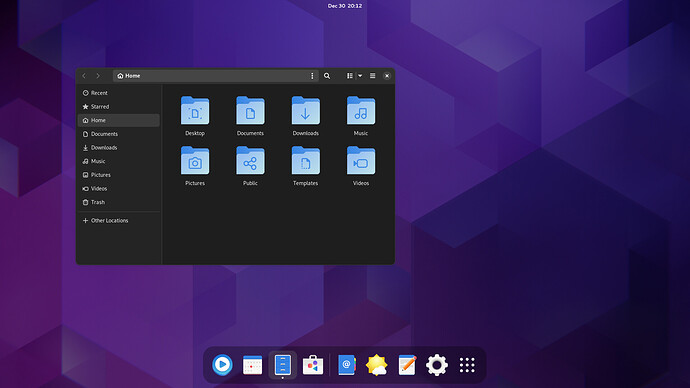 Note that I think this mockup isn’t up to date.

Still, your dock does not show groups of tiled windows, as shown in mobile-shell-convergence. 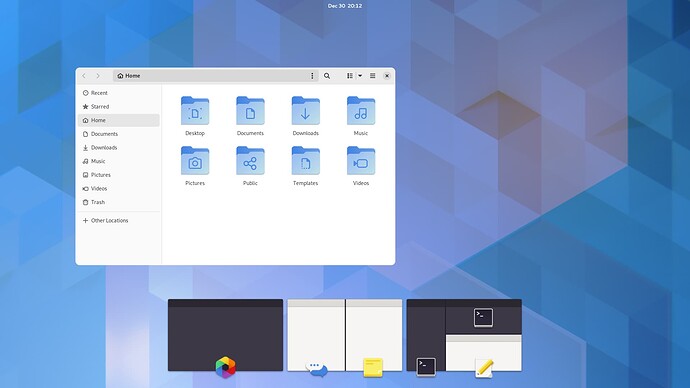 There’s no “desktop” in GNOME at all.