While shopping, I was reminded of Samsung DeX, in which the desktop had unique things that are not on the phone or tablet, it seems to be convergence, too.
I thought, that dock on desktop is a strong association with macOS, which can cause negative reactions and criticism

So, if not a dock that what? What can give similar functionality as dock, yet be unique and associated only with GNOME?
Of course, this is the legacy, old versions of GNOME. 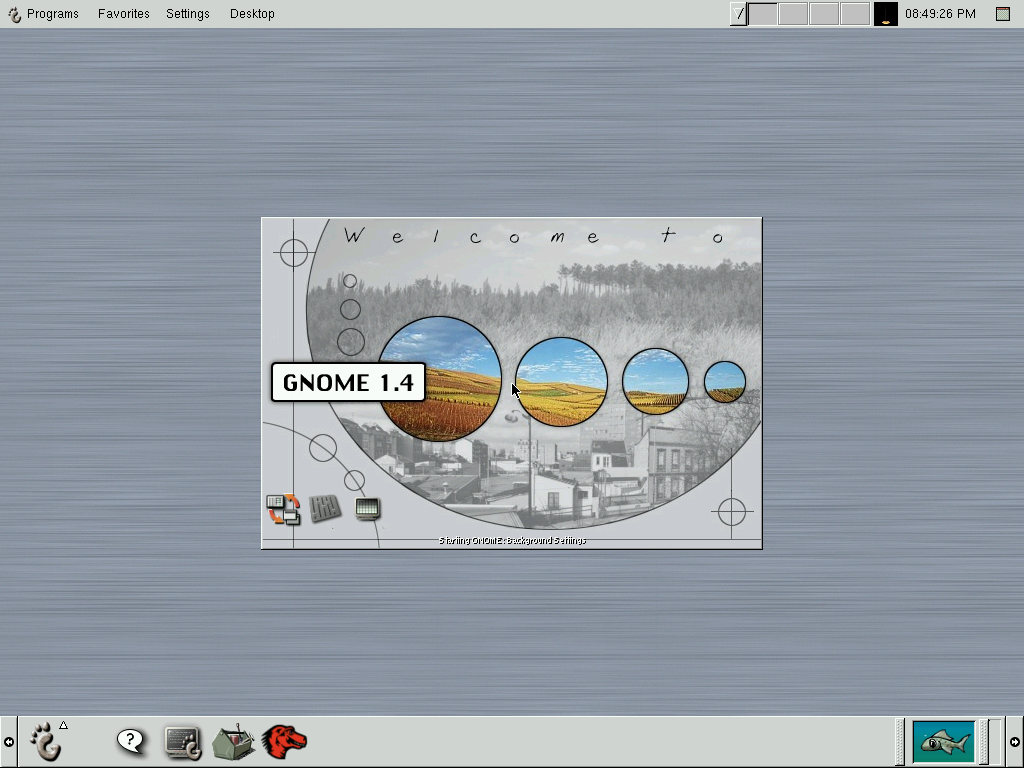 Why not modernize the idea of two panels for the desktop? It looks logical, new is well forgotten old. 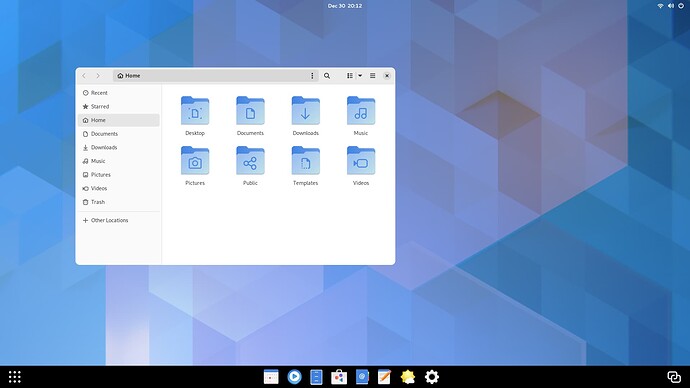 I’ll admit that I’m a Ubuntu user so this isn’t a default out of the box Gnome configuration. Here’s a screenshot of my current desktop with the Dash to Dock shown on the left instead of at the bottom. Usually this is hidden and I only access it for Firefox (Ubuntu’s Snap version doesn’t play well with Cairo Dock) or when the Cairo Dock itself crashes at startup after certain Ubuntu updates (requiring either one reboot or a launch from Dash). 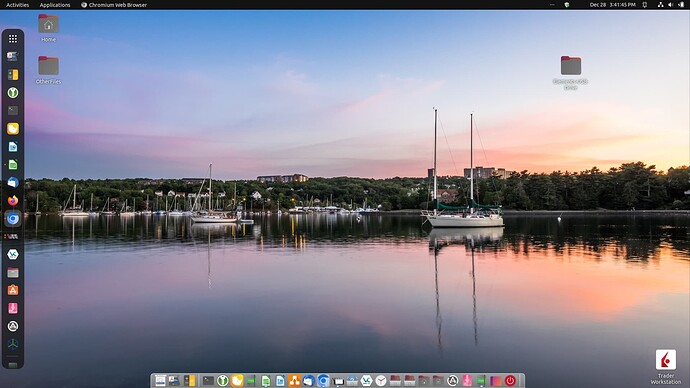 I’d love to eliminate Cairo Dock but it has a few functions that I don’t see in any of the other dock solutions like allowing you to launch a bash script that you added to the dock simply by adding the directory the script was in to the dock. You can even do the drag a file to an icon on the dock and drop it on it or pause for a moment as it brings that app to the foreground like you were showing in some of your first mockups.

So, I agree with you that a feature rich dock solution helps the user base be more productive (at least certain population of users). Yet, I think there are solutions available for those who enjoy the dock experience. It would be nice to be able to enhance the Dash to Dock with a few more features so that it could be “the dock of choice”. I’m not sure if that is something where Extensions would come in or not.

I still don’t get why this would be needed or even slightly better. But I’m also navigating by keyboard mostly.

I still don’t get why this would be needed or even slightly better. But I’m also navigating by keyboard mostly.

Happy New Year, navigating by keyboard makes GNOME much easier to use, by pressing the “Win” button twice to open an app grid, it saves time, although I don’t always get it to do this

Don’t rely on the keyboard, a lot of people don’t know about shortcuts, do not remember them, or they are not comfortable using the keyboard and mouse at the same time, especially when using a computer from afar with a wireless mouse.
So we also need to somehow solve the problem that using only the mouse time is more time-consuming.

Even if, making all previous behavior worse with cluttering an unneeded dock above them is hardly an improvements.

Dock, that’s not the only solution, we can think of something else, like rethinking of two panels like in old GNOME versions or something else.
I like the idea of the two panels, because it doesn’t look like stealing of ideas, but improving your own.

The only disadvantage of dock/panel is that it takes up more screen space.

(These lines are MY opinion.)

The last option is the one I’m currently using. I don’t know if (and I don’t care) this is GNOME’s philosophy but clearly that does improve my productivity, especially when many apps are open.

when I use GS 42 with a trackpoint or a mouse, design is obviously flawed since you have to carry your mouse cursor to the top left then do something in dash at the bottom

Why don’t you just press the super key?

Because we talk about mouse controls.

I use a dock on desktop but I don’t use it on laptop.
Laptop’s monitor is smaller than desktop’s.
It have to be able to choose between Dock and Dash. I like both of those.
GNOME Shell is not user-friendly now. I don’t think users who use GNOME Shell for the first time may be able to use it. It should make Dock default. And it also should be able to change to Dash.

I don’t think users who use GNOME Shell for the first time may be able to use it.

Are you sure about that? A friend of mine (who’s not particularly experienced with computers, and had only used Windows) wanted to use my computer to go on the internet. I was on the desktop with no window opened, and it took her less than 5 seconds to find the Activities button and click the Firefox icon. Of course, that may be anecdotal evidence, so you’d have to run proper user studies to back your claim.

Continuing mockups with two panels. Perhaps the idea of replacing the dock as on macOS with the panel like in old versions of GNOME is strange, the panel at the bottom looks distracting, and it probably depends on the styling, with blur and transparency there is will not such a strong sense of compression or claustrophobia.

Here’s an example of a light and dark style. 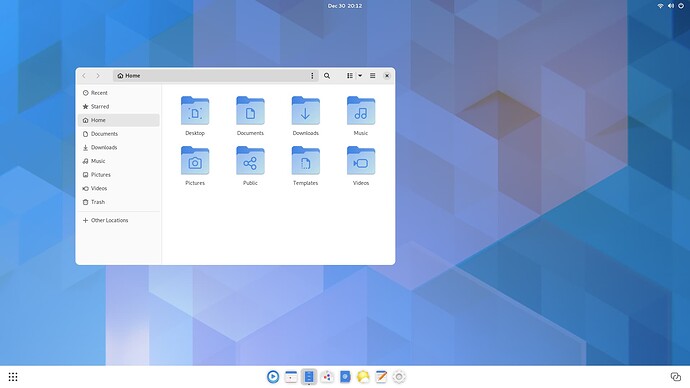 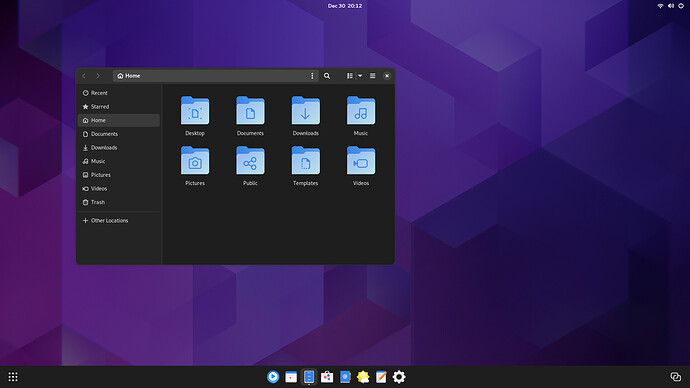 The location of the app menu and activities buttons on the sides can be awkward, but it feels more balanced, plus, in GNOME 2 workspaces were placed on the right, so it logic thing. 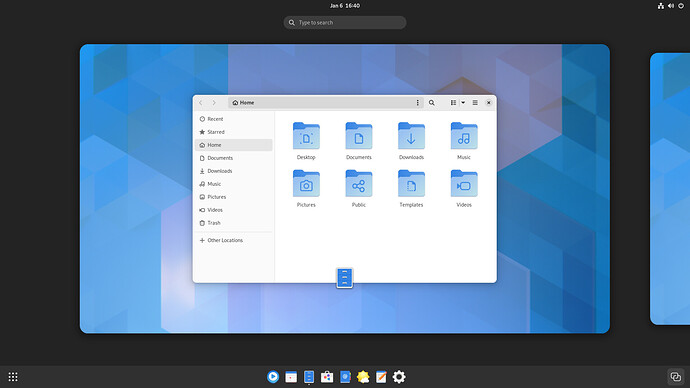 This is the tablet mode, where the bottom panel is larger. 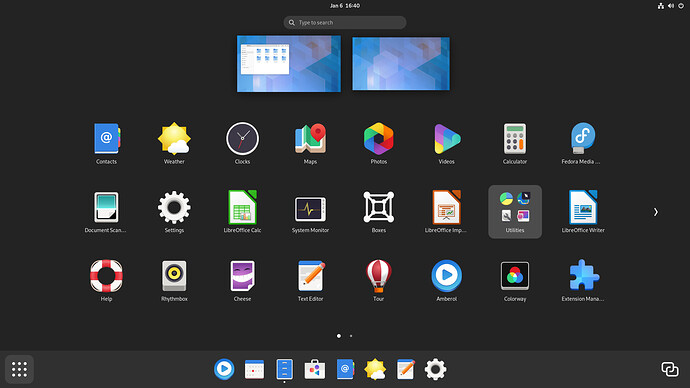 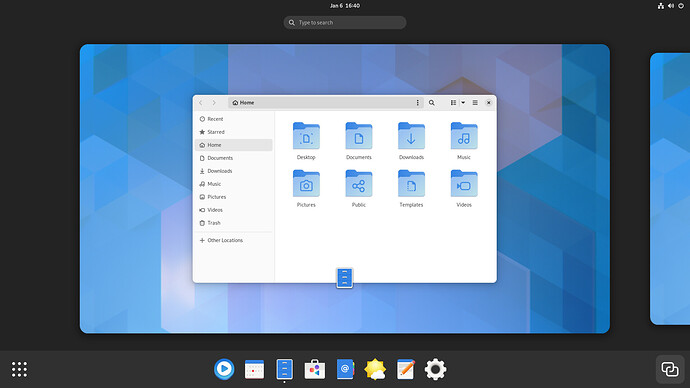 In this blog about gnome-info-collect research was a extentions popularity section.
Dash to dock and Dash to panel are in the top five most popular extensions, which is a very significant thing. 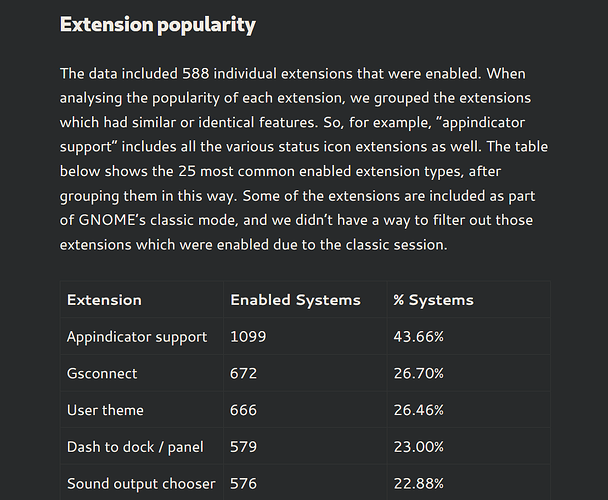 It’s less than a quarter of users!

It’s less than a quarter of users!

There were not counted pre-installed extensions by default in the distributions.

this is a tool users had to get to know about and download themselves, its data is not representative of most of the userbase