Can I change the theme or colors in Gnome Mines?

Is there a way to change the color theme in Gnome Mines? Back in Linux Mint 19.x (based on Ubuntu 18.04), it was pretty comfortable to look at, and easy to tell at a glance which squares were which numbers. The numbers themselves were bright, vivid primary colors that were easy to see and differentiate. In Linux Mint 20 (based on Ubuntu 20.04), the numbers are all black, and the background behind the numbers are barely visible pastels that you almost can’t tell apart. The colors might as well not be there at all! This makes it so you can’t just know at a glance what the square is supposed to represent anymore. Is there a way to get it back to a good, comfortable theme instead of this completely unusable and frustrating one? Any help on this would be appreciated. Thank you!

Some of them are more vivid which hopefully helps you

Which menu? There are no menus on gnome-mines. Just the three buttons on the right of the game area. 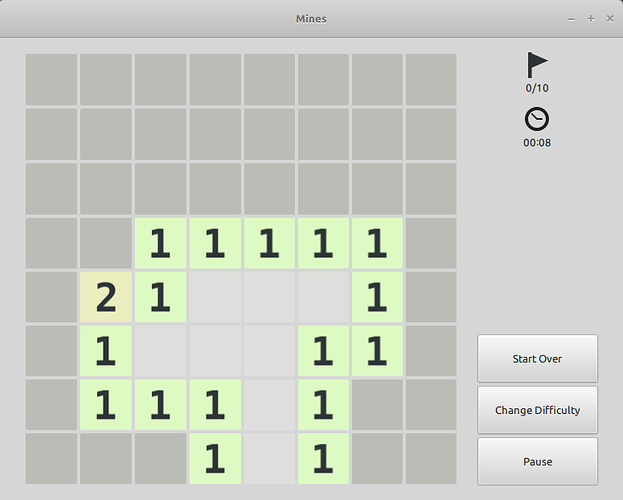 That menu doesn’t seem to exist on my end. Please see the screenshot from my last comment.

Looks like something to bring up with $DISTRO since Mines does, and has for some time, have a primary menu (and an app menu before that)

It must be in the application menu –something that revealed itself a bit hard to discover, and so that was deprecated in the last GNOME releases. So, click on the name of the application, in the black bar at the top of the screen; you’ll be able to open the Appearance dialog from there.

Ok, I’ll check there. Thanks

I don’t see that in my panel, probably because I’m not running Gnome as my DE. I’m using Cinnamon.

If you know what a terminal is, you can run one of these three commands to change the theme:

but we can easily admit that’s far from an ideal solution.

Normally, Cinammon should talk to the application and ask it to add a button to its headerbar for displaying the application menu, as it doesn’t handle it itself. I honestly don’t know how things are failing here. Let’s just say that this kind of problems have been solved in newer releases.

It must be in the application menu […] So, click on the name of the application, in the black bar at the top of the screen; you’ll be able to open the Appearance dialog from there.

No, the support for showing the menu in the top bar was removed in 3.32. Applications that still set it will get a fallback from GTK; that doesn’t appear to be the case here though.

I wonder whether Mint includes something like the nocsd GTK module by default.

In most Gnome programs, Cinnamon does include Gnome’s menu button in the title bar. But for Mines, it’s not showing for some reason. And to be honest, I don’t remember it being there in Mint 19, either. I haven’t seen a menu in Mines that I can remember since it had a traditional menu bar under the title bar.

I’ve read –a bit too fast, I missed the other information– “based on Ubuntu 18.04,” and that meant 3.28 (if I count correctly, as the Ubuntu number means April 2018). So the app should have an application menu –just compiled it, working here. We just have a weird case of bad fallback.

Ubuntu 20.04 has gnome-mines 3.36 according to packages.ubuntu.com, so I would expect Mint 20 to have the same version.

Just to make sure, what’s the output of

The “gsettings set org.gnome.Mines theme classic” line worked to fix the theme for now. Thank you!

Just for clarity: As I mentioned before that’s called the primary menu (with the “three dot menu” in some apps being the secondary menu)