What drove the GNOME Shell 40+ change to a horizontal overview? And can vertical be an option?

Can someone point me to the authoritative thread or post somewhere that records the deliberation and descision for GNOME 40’s move to a horizontal orientation for the Activities overview? I have tried to read as much as I could on the GitLab issue about it but I feel no closer to understanding the UX team’s reasoning, except that it seems to be a concession to touch interfaces.

Forgive me if I’m beating a long-dead horse, but this mouse travel issue for launching favorited applications feels like a big problem to me. The favorites are the main way I launch the things I use most frequently. The old vertical alignment worked extremely well. The mouse travel to the Favorites was shorter and the pageUp/pageDown keyboard shortcuts for moving among workspaces made perfect sense.

Everything else about GNOME works very well for me. I find myself going through a revolving door of extensions, and even trying alternative DEs, just to correct this one annoyance.

What would persuade the GNOME UX team to permit an Appearance option that rotated the overview back to the previous vertical style?

Have a look at New Shell design (feedback) - Desktop - GNOME Discourse which has various links and seems to be the root of the discussion.

Thanks. It appears the best answer to my question – and I’m doing my best to leave the bitterness out of my voice as I say this – is that GNOME 40 broke a truly excellent keyboard/mouse UI in order to make gestures marginally more comfortable for touch interfaces.

This is very unfortunate in my opinion. Perhaps it is a mistake to try and serve all input schemes with one interface.

Just to be clear here, “touch interfaces” means nearly every laptop made in the last 10 years or so, because they all have touchpads now. Currently this constitutes the majority of keyboard and mouse driven computers. There is actually no difference in input scheme here, they are one in the same.

I cannot see much reason to be bitter about this from this perspective, GNOME is not a hardware manufacturer. All the shell designers can really do is try to follow global trends set by other companies.

I did not realize my desktop worksation(s), with USB keyboard and wireless mouse, had become so far removed from that of the typical GNOME user.

I would disagree that these are one in the same. A mouse lacks multi-touch and gestures are not nearly as graceful. I would say a mouse cannot comfortably mimic what touchpads or touch screens do.

The former vertical layout served a mouse interface very very well. Mouse up to the hot corner and up comes the Overview. Scroll the scroll wheel to flip down or up among the workspaces, or a short trip with the cursor down to the favorited apps or the app grid. Nothing was cramped or awkward because the wide screen monitor accommodated these side bars, leaving exactly the right amount of room for the zoomed-out view of the current workspace. In a Linux world full of DEs that all feel a bit clunky and unfinished, this was perfection. When I first saw this changed to horizontal (I think I was on Fedora or Arch at the time), I didn’t think much of it. It seemed awkward but not a catastrophe. Later, I put Debian Buster on a laptop and noticed immediately how much less effort, how much more natural and pleasing, the old style actually was.

I did not realize my desktop worksation(s), with USB keyboard and wireless mouse, had become so far removed from that of the typical GNOME user.

Well again this trend is present in computer hardware as a whole, it does not make a difference whether you are using GNOME or not.

I would disagree that these are one in the same. A mouse lacks multi-touch and gestures are not nearly as graceful. I would say a mouse cannot comfortably mimic what touchpads or touch screens do.

I don’t mean in terms of what workflows a particular input method works well with. Personally I do plug a keyboard and mouse into my laptop often, but the OS still needs to have support for touchpads and gestures to claim it fully supports the device as a whole.

with USB keyboard and wireless mouse, had become so far removed from that of the typical GNOME user.

I’ve been known to use a wireless keyboard, truly living in the future!

But yes as said: Laptops got crazy popular, and touchpad-with-desktop seems to be becoming more common as well. Obviously the “regular mouse” isn’t going to disapear, and I often carry one with me, but it’s use as a main input method is in decline.

I would note the shell is still fairly keyboard-driven, and even with all these fancy touchpad (which ≠ touch) gestures, I still rarely actually mouse around in the shell UI vs keyboard shortcuts.

I just made this as an extension of my extension

My Workspace Switcher Manager extension has an option to reverse default workspace orientation (because it’s so easy), but even if GNOME Shell 40+ supports vertical navigation, it breaks ui in the overview. I only wanted to fix it, but as usual I saw more options in the code… 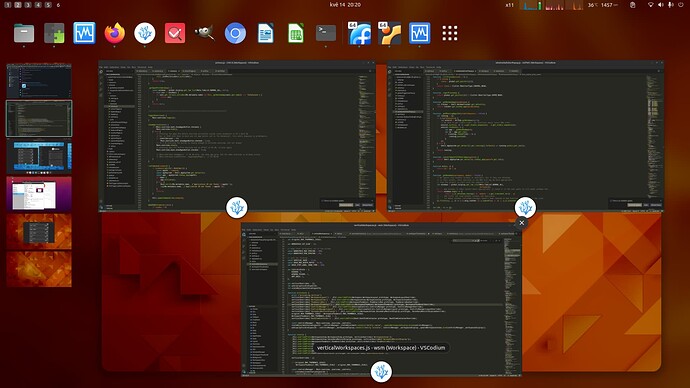 The vertical overview was objectively superior in a number of ways. It especially made more sense with the Page Up/Down keys and the mouse scroll wheel. A number of criticisms were raised when this design was presented to the public, and as far as I could see they just went ignored.

Honestly, it feels to me like they’re just chasing trends now and changing things for the sake of changing them. I’ve been a long time GNOME user and have always been very happy with GNOME’s design, using it completely stock with the default theme and no extensions or anything. But lately it feels like there’s been some kind of change in their design team or something. The vertical overview change and now the new flat theme (after they only just changed Adwaita a year or two ago!!)… It’s like they’re just chasing trends. Just copying what other operating systems are doing.

Fortunately, there is an extension to get back the vertical overview, but it’s honestly not as good as the one we had before. It’s better than nothing though… I’m now using that extension, and am hoping the previous Adwaita theme will be ported to GTK4 so I can switch back to that.

I don’t get the complaint. This is a good thing, a lot of open source projects are actually required to do this in order to stay relevant. Imagine if Linux did not “chase trends” of supporting recent Intel and ARM hardware, you would have severely degraded functionality and may not even be able to use it at all. It’s the same thing with GNOME, the recent changes are to better support things like touchpads and the system-wide dark theme, if they don’t support those then users complain even more that their hardware and apps don’t work and will leave for other operating systems that do it better.

Personally I don’t really understand gnome developers and their arbitrary choices. Why is it so complicated to let me choose the layout of my desktop, dasboard or the options of my list-view by default, in nautilus…
I’m not one to customize my desktop, wallpaper, list-view, folder before files. This is the minimum, finally if we consider that it is a “MODERN desktop environment”
All that to politely say that it’s very painful.

Personally I don’t really understand gnome developers and their arbitrary choices. Why is it so complicated to let me choose the layout of my desktop, dasboard or the options of my list-view by default, in nautilus…

Because it’s software, and while everything is possible, not everything can be magicked away just because you wilfully ignore the details of the implementation, the constraints upon which it is based, and the fact that we don’t have thousands of engineers, QA testers, and designers at our disposal.

Frankly, not conceiving the idea that a person has the desire or the ergonomic need to have his dashboard where he wants it is not even defensible. The same goes for list views… Going through genre variables:
gsettings set org.gnome.nautilus.list-view default-visible-columns “[‘name’, ‘size’, ‘date_modified’…]” is really not users friendly, and I am weighing my words. Also I don’t use systemd and I can’t change this layout, even with dconf.
By the way, gnome is very often the default desktop. How to turn off a new linux user.
Rather than designing variations, gnome-classic and the other that I forgot, you should ask yourself the right question… And if we left a bit of freedom to users?
Sorry I’m a bit harsh with you, but you make me think of these engineers who think and do things for other engineers.
C’est un peu chiant à la longue . (en français dans le texte).

There are many things that I wish were implemented too, not everything can be done the way we want all the time. I could make you a huge list but that is unlikely to be a useful direction to take this topic.

I’ve been using Gnome since 2002. I’m not particularly nostalgic for Gnome1 and 2. Gnome3 was better, in any case, much less worse than 4, since it evolves despite common sense.
Sometimes I wonder if you don’t want to teach us how to use a PC. If so, pedagogy is not your forte.
We are therefore sticking to our positions, this discussion will obviously lead nowhere…

Everybody has different sense of good practices, ergonomic design or sense of style. I personally find the current style of Shell as the best style it ever had. It is impossible to please everybody with a single solution and maintaining a number of options puts additional burden on the maintainers.