Gitlab diff view interface is better for reviewing git changes, when the changes get bigger. I always use it before creating a merge request, but later changes are automatically pushed to the merge request before I get a chance to review in gitlab.

I tried the tools in https://git-scm.com/downloads/guis, most of them are broken in one way or another ( not available for linux / needs license / depends on gconf / literally broken and unmaintained etc ). I find the gui shipped with git to be too archaic ( tcl / tk ).

Any recommendations for a git gui app for reviewing local git changes for the latest linux environment.

I absolutely adore Sublime Merge — and I am not a Sublime Text user — as its three-pane conflict resolution interface is by far the best I’ve encountered so far.

(I should say, though: I actually find it far more critical as a submitter than as a reviewer. It’s indispensable for managing my own branches and shepherding them along the path to becoming PRs, especially in the face of upstream changes that occur during the branch lifetime.

For review of changes by other developers, I actually find the Github web interface pretty comfortable. …And, now that I’ve re-read your initial post, it sounds like you’re asking about exactly that, so yeah. Sublime Merge all the way.)

I had had the same quest once. When I was new to Git (around two or three months ago), I was also looking for a good GUI app. I also faced the same archaic apps LOL.

Then after, some tryouts, I just started to use Git from terminal and it is just awesome and works fine. And for effective diff viewing, Magit in Emacs offers a nice interface.

As said by others, Github or Gitlab’s web interface too is quite good.

Github recently launched a CLI app, anybody tried it ?

Github recently launched a CLI app, anybody tried it ?

The hub command (which is actually more of a relaunch and adoption of the previous, unofficial hub command) is primarily a set of extensions to command-line git that lets you perform Github-specific actions. Like, you can hub fork inside a cloned upstream repo to automatically create your Github fork and add yourusername as a remote pointing to it. Or, hub pr checkout $number will automatically add the PR submitter’s username as another remote, and then check out their PR branch. Things like that. It doesn’t overlap with standard Git functionality, though.

And for effective diff viewing, Magit in Emacs offers a nice interface.

The first command I tried in Magit messed up things, which took sometime to undo. Also I would prefer to keep major diff reviewing out of the regular dev environment to have a fresh outlook.

Looks promising though proprietary. Will give it a shot.

Then after, some tryouts, I just started to use Git from terminal and it is just awesome and works fine.

Git command line is still my preference for all day-to-day tasks. I don’t trust porcelain tools with my repo. But I find them very useful for reviewing purposes, as their presentation of code changes is good.

Sublime Merge is good too, but gitg solves my problem with less resources.

The current released version ( gitg - 3.32.1, released Jul 25, 2019 ) is less impressive with lot of warnings. The git version is much better with lots of useful fixes and features. I think it’s a good time for gitg to makes a release. 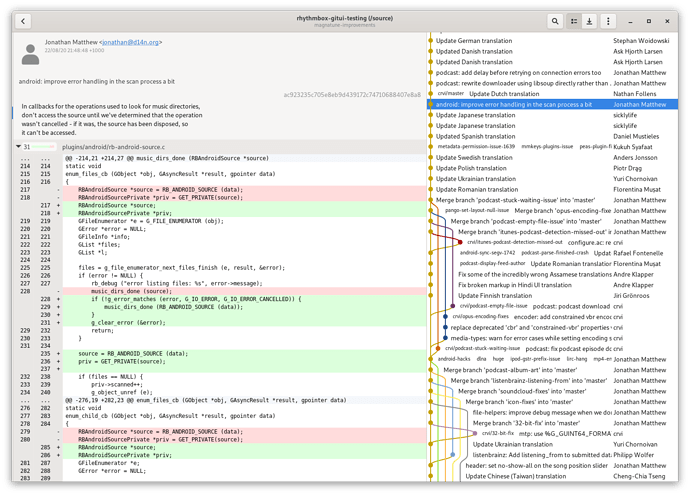 The git version is much better with lots of useful fixes and features.

I’ll have to check that out! Last time I played with it was whatever version is packaged in Fedora at the time and I remember being underwhelmed, but I haven’t looked at the new changes at all.