so I had filed an issue against Files/Nautilus, which got justly closed as requiring further design input and UX research and I was advised to put this to discussion here.

My user experience broke with the Recent Folder/List in Nautillus’ sidebar, which I had always experienced as a folder and I could not delete its contents by pressing the delete button.

of Files/Nautilus would have been, that I can organize the Recent Folder/List by deleting the clutter, so that in the next few days I can use it again efficiently to look quickly up the useful files.

This example exposes the

what the nature of the Recent Folder/List actually is? Is it a folder, is it a list or something else? And how far should the analogy go? What are the user expectations?

Importantly should the user be able to organize it?

For me the Recent Folder/List was

But other users may have other expectations. For instance deleting a file from the Recent Folder/List one may expect this operation to send to the Trash the underlying file itself, which would now be a destructive operation.

So, what are the designers’ opinions or plans? What are other GNOME users’ use stories of the Recent Folder/List? What’s the plan in general?

Some brainstorming points from the discussions

Thanks for starting this brainstorm!

The “Finding and Reminding” initiative from a decade ago has some related insights on this topic: https://wiki.gnome.org/Design/Whiteboards/FindingAndReminding

It mentions a concept of “Archiving”, which has some overlap with the “Remove from recent” action.

We also have a Starred view now, which is a kind of “Pin” action, except in a different view.

The idea of an entry point combining Recent + Starred could be explored too.

I guess a simple solution to clarify the situation of deleting from the View vs. actually deleting the file would be a user-interaction dialog. Maybe something like this:

The relevance of Delete would be as a fast and convenient shortcut. A dialog makes it slow. And “Don’t ask again” is thorny.

I think we should make Recent and Starred consistent in regard to Delete.

Pressing Delete in the Starred view correctly sends the file to Trash. And there is a notification explaining what just happened and offering to undo.

This approach avoids interruptions while keeping the user informed. On the other hand, I’m concerned that a user might not expect that the trashed starred file is gone from the real folder as well.

You are right, the “Don’t ask again” is nothing but a hidden preference that would not be able to be triggered later, so that is bad.

However, with the current situation being very ambiguous on what delete should do (virtual folder vs. real folder) an interactive dialog seemed like the most straightforward way to clarify that, without touching too many other things. If we are talking about bigger UI changes to clarify the special state of Recent and Starred, then there are of course many more possibilities.

Some ways for the user to be able to better distinguish Recent and Starred views from ‘regular folders’:

Here is a mockup of how that could manifest (this was made in Glade, not all differences to current nautilus are intentional): 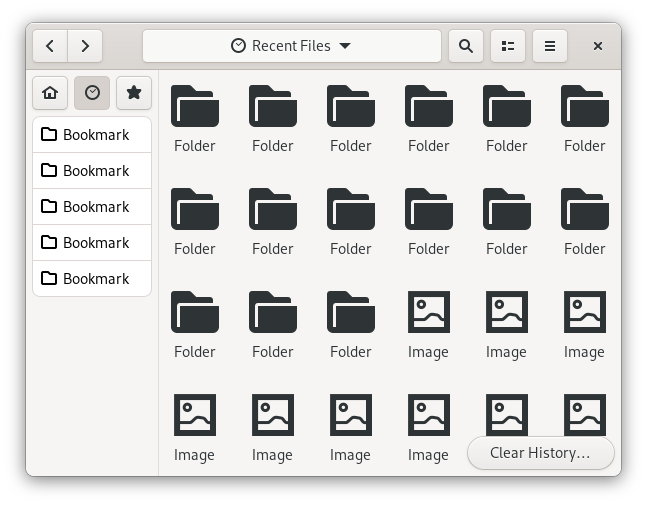 Some form of “Clear History…” button would be really interesting to explore as well, and may help address the “recent list becomes too big and slow” issue.

Okay… by mere accident I discovered, that Shift+Delete does exactly, what I supposed, Delete would do: removing an element from Recent without removing it from the folder, of which it really belongs.

I would agree that this is somewhat inconsistent behavior, yes. But as already established, this comes from the ambiguity of what Delete should do.

If you mean whether this should happen for Shift+Delete then I’d say no, as it is supposed to be a destructive action. The file would not appear in the trash for shift+deleting anywhere else either.

You are right, such destructive actions usually come with warning dialogs, but as in this case it only deletes metadata (access time of file), it should be fine without one.