Hi, I’ve used Gimp for years but doing noting more than editing images so don’t really create anything and I go months without using it so never learnt much at. The one thing I use it for is to get two images and create another image. I have always done this simply by copying a section from one and placing into the other and then erasing all around the edges of that selection to leave the item I want in the item. Let say I have two image one of apples & one of oranges and I want to place an apple in the oranges picture. I simply cut and paste the apple, scale it to size, perhaps making it 50% transparent, then I just use the erase to remove the background and put the transparency off.

This is basic and simple but after an upgrade last year now the eraser won’t work on the selection so I no longer have a use for gimp. I’ve tries all the setting I can find can anyone tell me whats gone wrong please?

Can you post a screenshot showing the GIMP user interface in a case where you are about to erase, and it doesn’t work?

I can when I get time but it’s just as I said reall;

Open 2 images
Cut and paste an area selection from one to the other.
Select the pasted selection.
Use the eraser, it has no effect on selection or the image I’ve pasted on to.

Always used to be that easy but now can’t work out how I can do it.

If you are trying to remove a white background, then lake sure that the layer has an alpha channel (Layer > Transparency > Add alpha channel) (otherwise erasing is the same as painting in the background color). Layers without an alpha channel can be recognized by their name in boldface in the Layers list. Two layers on which I have given a stroke of eraser: 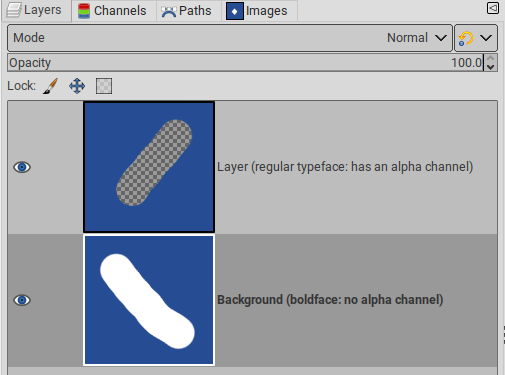 Also, although using the eraser works, it is a lot more efficient to use a layer mask: you add a layer mask and you paint black where the layer should be transparent. The big difference with the eraser is that it is a lot easier to correct mistakes: with the eraser, if you notice an over-erasure, you have to undo your work up to the stroke that made that dent. With a mask, no sweat, you just paint some white to reinstate the initial image.