As I see that their is renewed interest in the development of Nautilus, I think it’s a good time to share a mockup I made a few years ago (see mockup below).

The mockup show my ideal arrangement of the shortcuts and bookmarks in the sidebar.

This arrangements is, in my perspective, ideal, because: 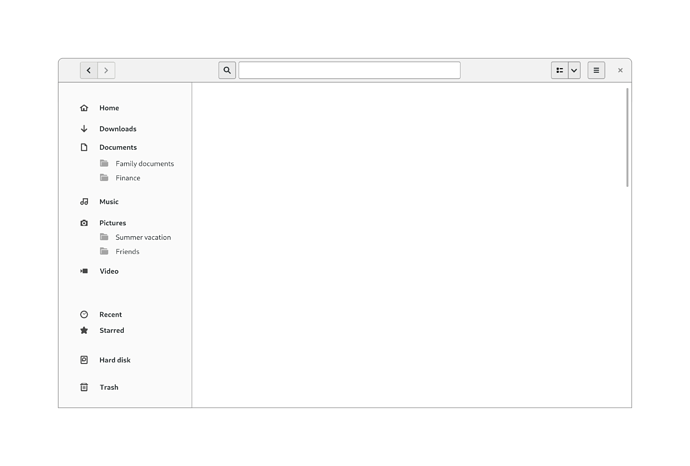 What do you think of this mockup?

Thanks for the idea.

It reminds me of a mockup I drew in the past where bookmarks would be groups by drive instead!

Actually, the current plans are to demote Downloads/Documents/Music/Pictures/Video to regular bookmarks. Many people don’t use all of these folders. And, for example, it’s possible to have videos in Downloads, to have images in Documents, or to have music videos on Music. We have effective search that wasn’t always available in the past, so we can leverage search to find Video files, for instance, instead of expecting people to put all of their videos in the Videos folder.

@antoniof: thanks for taking a look at it!

If they/you are going to demote the shortcuts to regular bookmarks, than I think that’s a good idea! Indeed not every folder is actually used.

If they/you are going to do that I would like to propose one extra feature: the ability to organize various bookmarks in a group. I remember that I missed such a option when I was working on several projects and I had many bookmarks added to the sidebar. I’m only not sure how this would look like and how someone could add, edit and delete groups. But that’s for another time.

Bookmarks here are not meant to scale to large numbers.

What you are requesting is better served by folders with symbolic links inside. Then you can bookmark these folders.

Anyway, this is only important when they actually have demoted the default shortcuts/bookmarks.

Thanks for taking a look at it!