I’ve restarted my cross-platform GTK4 C application from scratch. It’s an application that unfolds a volume from its 3d file and draws it flattened as a net of 2d triangles, that’s the easy part that I already made. 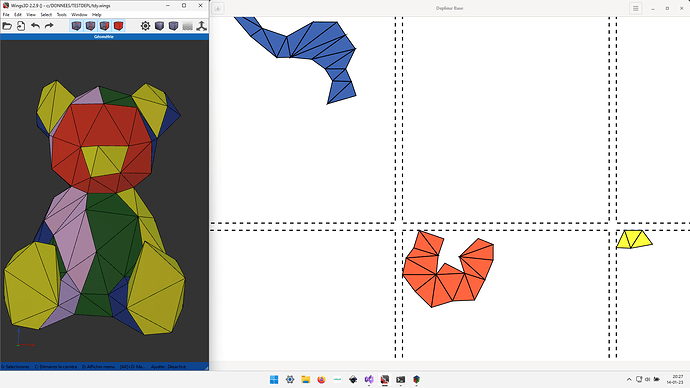 Capture d’écran 2023-01-14 2027171920×1080 191 KB
Next I want to add interactivity. For the previous version I did that using only a drawingArea that I redraw as needed, adding visible elements to show the user what the current selection is and so on. What do I need to do if I want the user to be able to hover a piece and have it change its border or color to reflect this hover event ? And what do I need to do for the user to be able to drag a piece a move it around the drawingArea ? (make a custom widget ? another drawingArea with only the pieces that shows on top of the big one ?) Or do I need to keep using only one big drawingArea and it’s events ? Depending on the 3d model, the big DrawingArea can contain more than 100 pages (the example shown has 15 pages). Is there somewhere an example of GTK4 C application implementing drawingArea hover and/or drag ? I think I read here that it’s just a matter of event to be able to hover on a drawArea, but I didn’t find anything about dragging, if needed it would be enough for me to be able to drag the bounding box frame of the piece, does this mean that I need to put a box over the drawingArea ?
lb90 January 14, 2023, 11:47pm #2

GTK doesn’t care what you draw on the GtkDrawingArea, that’s the application business. As such, it cannot do picking for you — the application has to do some math and determine which piece is under the cursor.

Subscribe to the GtkEventControllerMotion::motion signal, that will give you the x and y coordinates of the mouse cursor. Then you have to determine whether the cursor is above the piece or not

Thank you, for the previous version of my application I handled piece picking, movement and rotation using events on the drawingArea, one on left click, another on right click and lots of keyboards pressed events. As I saw the gtkDemo drag example I was hoping that it was possible to implement it using a drawingArea or a custom widget, but I can simply reuse my code and improve it using an event to capture mouse moves even without a button press.

Apparently, it could be helpful for me to use gtk.snapshot for each piece I draw as I can use translate on them to move the whole piece instead of redrawing everything. Browsing the gtk demos, I found that “Simple paintable” is using snapshot, so I’m going to learn from it.

For the moment I was able to implement hover on graphical elements and it works fine. Sadly even if my app works, the way I use Cairo makes it hangs from time to time, certainly because of memory management. I tried to use GtkSnapshot but didn’t understand how to use it. It reminds me that before I started using GTK4, I made a console version of my application that only uses cairo to create a pdf file and it was able to create pdfs with hundreds pages without problem, and the first GTK4 GUI version of the app that used a GtkNotebook also was able to create and edit big pdfs, but having only one page shown at a time was not handy for edition. I hope that I will be able to implement a pagination that would allow Cairo memory management to stop hanging the application. But if pagination is mentioned several times on posts about draw area and cairo, there’s no concrete example. I first planned to use one gtkDrawArea per page, that was what I did on first version on the app with a notebook, but here pages are shown altogether. I don’t get how I could handle mouse events in such context. What is frustrating is that what I implemented, hover handling works perfectly.