How to get full Valgrind report in Builder?

I’m developing a small GTK4 application in a Flatpak version of Gnome Builder, and trying to detect leaks using Valgrind from the Run button. When I get the report, it suggests adding the extra --leak-check=full option to the command, but I couldn’t find where could I modify the run command or add flags.
Note, that I’m developing this GTK4 app on an Ubuntu LTS with GTK3, so if I just try to run the built executable, it won’t be able to find the GTK4 libraries.

Thank you in advance!

You can run a new build terminal with SHIFT + CTRL + ALT +T then you would be inside the locale flatpak repository that was created for your application. This should allow you to run valgrind yourself

Thank you for your response. When I open the terminal with that hotkey, it opens a terminal in my home folder (~/). I can run valgrind, but there’s no executable binary. Even locate doesn’t tell me where is the executable. Unfortunately I cannot use valgrind without the executable.

OK, I’ve found the executable in ~/.var/app/org.gnome.Builder/cache/gnome-builder/projects/fluidapp/builds/de.teamaux.Fluidapp.json-flatpak-org.gnome.Platform-42-x86_64-master/src, but this terminal just doesn’t seem to respect the flatpak dependencies, and complaining on the lack of the gtk4 libraries as any other terminal:

Note that the terminal will set $BUILDDIR to the build directory for you. So you can just cd $BUILDDIR after opening the terminal.

Most likely you’re running the binary from the build directory which probably doesn’t have finalized link paths setup yet (I think Meson does that as part of installation).

Builder has a “hidden” feature that lets you install your project (so it will be in /app/bin) which you should run instead of the binary from the build directory. Ctrl+Enter then type install and press Enter again to install the project. You can also go to the build panel (middle panel on the left sidebar) and then expand the Build Details expander, and click on the “install” row.

Also, I’ve added --leak-check=full to the GTK 4 port, and I’ll see about making it toggle’able from the run menu.

Thank you for the hints. In theory that would suffice, and I’d be happy. In reality however install doesn’t install my app in /app/bin, and $BUILDDIR is empty, so cd $BUILDDIR just leads to ~/.
Here’s the output (it looks OK):

FYI, I’ve finally found a way to run Valgrind with arbitrary options on the executable within the runtime. Here’s the trick:

I made it a bit easier for you when the GTK 4 version of Builder lands. 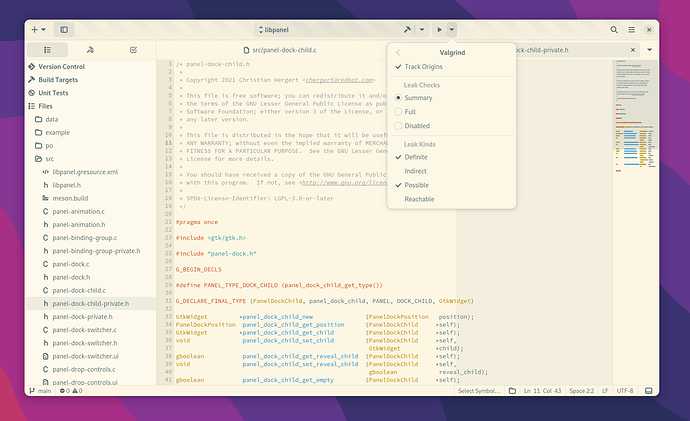