Recently I switched to Solus, an OS that at the moment does not accept packages that use libhandy. There are some discussions and speculations about the usage of libhandy and most GNOME apps.

Which got me curious so I thought why not ask folks over here directly: Do you think libhandy will be used after upgrading to GTK4? Also curious about why or why not.

Hi, a libhandy developer here. Yes, it will be available for GTK4. In fact, we’ll likely move more GNOME-specific widgets there and out of GTK, though the plan is not 100% decided yet.

As for Solus, keep it up, that thread made for a great laugh.

Thanks for the reply, however that is not my question. I’m asking if in the future Geary will drop libhandy as a dependency because GTK4 opens up possibilities to do so.

Also not sure what is funny about the linked thread…

because GTK4 opens up possibilities to do so.

It doesn’t. I upstreamed 2 widgets, and a few more are doable with GTK only, but most stuff isn’t.

Also not sure what is funny about the linked thread…

Because it’s obvious nobody in that thread has any idea what they are talking about, what libhandy even does and acts purely based on “this lib has the word ‘mobile’ in description” and emotions.

I have to say, I had not come up on a speculation thread that could rival reddit in all of its aspects! The linked thread is great, and dead wrong on everything. The thread talks about Purism and the libhandy folsk as if they are some Celestial entity completely detached from everything going and that just decided to do things one day without talking to anyone. Its clear they never read anything about it or cared to ask anyone involved with either GTK,GNOME or libhandy as all of their “Why couldn’t they just” queries have been well documented.

They also don’t seem to even understand what libhandy is used for and think that GTK 4 will make it irrelevant or replace the usecases, which is also dead wrong.

The whole thread is full of toxic circlejerking like the following:

I am inclined to agree, I don’t expect people who make poor decisions to quickly change course. Especially not in GTK/Gnomeland.

If they don’t want to package libhandy, that’s fine and nobody is forcing them. But they could at least try to understand how their distro is functioning and what’s the goal of the apps they are shipping by default. It also wouldn’t hurt to ask why things are the way they are. But where’s the fun in that when you can instead make up things and shit on other people!

In sort, as usual, people who are not involved at all in GNOME’s development at all, make up fairytales so they can justify their hatred. Grats. Its truly like a reddit post trying to “figure out” the reasoning behind a change, when the OP is a link to the issue detailing out why it happened.

Sorry, this isn’t answering your question or addressed at you personally, but rather a short rant after reading that thread on the Solus forums. They have repeatedly refused to listen to the technical reasons why libs like libhandy exist and continue to spread false information about it.

To answer your questions, there are no plans with migrating/dropping libhandy, or its gtk4 replacement. There isn’t anything wrong with libhandy either. The whole situation is manufactured one from a self-proclaimed anti-infection rhetoric. In reality things are moving from GTK to Libhandy as its lifespan is going to be a lot smaller and it can be more flexible with Symbol addition… Most of the apps that depend on libhandy do so cause they ended up deleting their own implementation of hacky widgets that were providing things like touchpad gestures support.

Actually, it’s more like this app now looks completely out of place on my desktop, and requires an additional library in order to do so, for little to no benefit.

No offense, but applications using libhandy look crap in many cases.

So you’ll either say you don’t see anything wrong or that it’s not an issue with libhandy or whatever even though there’s obvious differences between applications using it and those that don’t.

In any case, I don’t really care enough for all that.

It’s simple, avoid using your own styling and ensure that it looks as close as possible to everything around it or don’t.

You can take the feedback for what it is or simply ignore it.

You can also pretend that anyone who doesn’t see it your way is just part of “the peanut gallery” as you guys have been doing in this thread so far.

Which, by the way, I found pretty disrespectful and counterproductive. But not unexpected, unfortunately.

It’s simple, avoid using your own styling and ensure that it looks as close as possible to everything around it or don’t.

I’d just like to point out this is GNOME, we are the styling and surroundings

Or more likely your theme doesn’t support it.

Hint: libhandy includes styling so apps don’t have to bundle it themselves like they did before. Like those listboxes that every app previously had custom css for.

Gentle reminder that Discourse operates under the Code of Conduct. Don’t make me break out the mallet.

I’d just like to point out this is GNOME, we are the styling and surroundings

And I was just pointing out that you’ve broken any semblance of consistency by half-assing adoption of a library which changes only certain user interface elements to not match core applications therefore making them stick out like a sore thumb.

Handy is used in Settings, Clocks, Contacts and I’m sure many other apps in the Core set

Handy is used in Settings, Clocks, Contacts and I’m sure many other apps in the Core set

I don’t think any of those use the Handy HeaderBar.

And that’s really the worst offender as far as looking out of place. 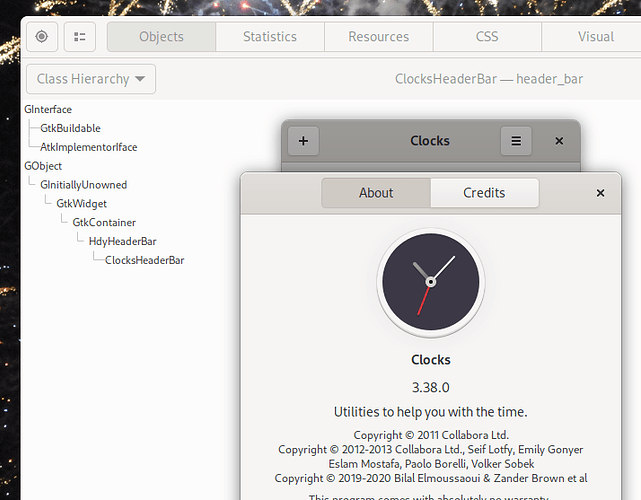 The latter 2 do. You just never noticed because HdyHeaderBar looks exactly same as GtkHeaderBar, except it can be draggable when put inside the window. But don’t let pesky facts get in your way.

I think there’s an assumption here that the new libhandy widgets are not part of the HIG and therefore “out of place”, when it’s actually the other way around: Everything that isn’t using these new widgets (such as HdyViewSwitcher) is just not updated to the latest style yet

The design team has long wanted a faster-moving library than GTK with nice implementations of our design patterns. For various reasons libhandy has become that library over the past few years, and now includes a ton of widgets which have nothing to do with adaptiveness. If anyone has a problem with how new GNOME apps look, then their problem is with the GNOME design patterns, not with libhandy.

The latter 2 do. You just never noticed because HdyHeaderBar looks exactly same as GtkHeaderBar, except it can be draggable when put inside the window. But don’t let pesky facts get in your way.

Don’t let that pesky screenshot get in the way of asserting that all those header bars are exactly alike though.

Of these 3 apps, only Clocks uses HdyHeaderBar. Not sure why you included Nautilus?

You probably wanted to bring up HdyViewSwitcher, not HdyHeaderBar. As Tobias mentioned, not everything has been updated to that one yet.